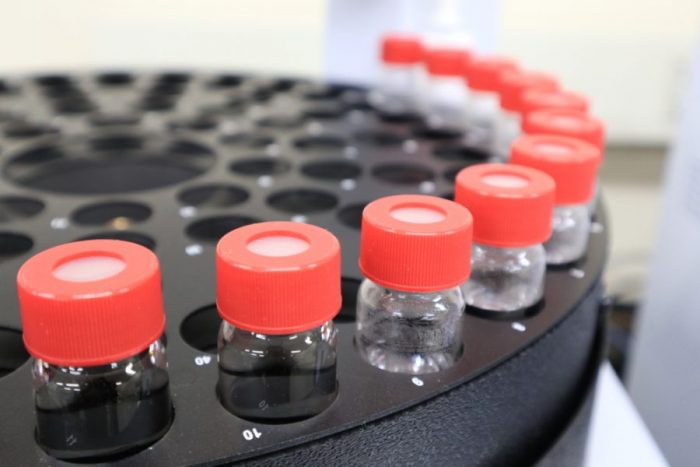 What is Gas Chromatography-Mass Spectrometry (GC-MS)?

Analyzing small and volatile molecules is made not only possible but simple with Gas chromatography-Mass Spectrometry (GC-MS). GC-MS is the separation technique of choice for smaller volatile and semi-volatile organic molecules such as hydrocarbons, alcohols, and aromatics, as well as pesticides, steroids, fatty acids, and hormones. When GC is combined with the detection power of mass spectrometry (MS), the process can be used to separate complex mixtures, quantify analytes, identify unknown peaks, and determine trace levels of contamination.

This technique can detect picogram quantities of material. Automated Thermal Desorption (ATD) GC-MS is a powerful tool for identifying organic contaminants. These may be present as an adsorbed film on silicon wafers, as airborne vapors in the manufacturing environment, as dissolved components in ultrapure water or process chemicals, or as vapors that outgas from plastics, coatings, garments, o-rings, and similar materials.

GC-MS can be used to study liquid, gas, or solid samples. How does it all work? Well, tell you! It all begins with the gas chromatograph. It is here that the sample is effectively vaporized into the gas phase and separated into its various components using a capillary column coated with a stationary, solid, or liquid, phase. The compounds are then propelled by an inert carrier gas. This is typically nitrogen, helium, or hydrogen. As components of the mixture are separated, each compound elutes from the column at a different time based on its boiling point and polarity.

The time of this elution is referred to as a compound retention time. Once the components leave the GC column, they are ionized and fragmented by the mass spectrometer. This is done using electron or chemical ionization sources. These molecules and fragments, now ionized, are accelerated through the instrument’s mass analyzer. This is most often a quadrupole or ion trap, but not always. Here, the ions are separated based on their different mass-to-charge (m/z) ratios. This type of data acquisition can be performed in either full scan mode, to cover either a wide range of m/z ratios, or selected ion monitoring (SIM) mode. A second option is to gather data for specific masses of interest.

The process is nearly complete! The final steps of the GC-MS process involve ion detection and analysis, with fragmented ions appearing as a function of their m/z ratios. These peak areas are proportional to the quantity of the corresponding compound. When a complex sample is separated by GC-MS, it will produce many different peaks in the gas chromatogram and each peak generates a unique mass spectrum used for compound identification. Thankfully, there are extensive commercially available libraries of mass spectra available to scientists across the world. Using this great resource, unknown compounds and target analytes can be identified and quantified.

This method has the capacity to resolve complex mixtures or sample extracts containing hundreds of compounds. Wow! If you need AFM, Cerium Labs is here to help! We have experts in Gas Chromatography-Mass Spectrometry (GC-MS) here in-house, ready to get to work for you and your project!

The benefits you get from chemical analysis of materials

You do not always know what something is by just looking at it. Sterling silver, steel, and platinum look similar…yet their prices tell you they are very different indeed. Chemical analysis characterizes the chemical components in a material which helps to identify the minor and major elements in addition to any unknown trace elements. Material analysis is critical for verifying raw materials prior to production so time and money are not lost using the wrong or contaminated material.

The benefits you get from proper and professional chemical analysis of materials include:

The chemical composition of materials is determined using various spectral analysis under laboratory conditions. A common survey analysis, something we would do when we have very little info about a sample, would be SEM-EDS (aka EDX). Using SEM-EDS, our specialists can determine the chemical composition of the sample and can easily extract the elemental concentration and distribution of various elements in the sample.

HR-ICPMS or High Resolution Inductively Coupled Plasma Mass Spectroscopy, is used to analyze extremely pure chemicals. ICPMS can detect elements in a material in the parts per billion level and less in some cases. This is critical to many manufacturers where just a small amount of Fe or Na could create major manufacturing issues and lead to million-dollar losses.
We here at Cerium Labs regularly offer these and other options, such as ICPOES (Inductively Coupled Plasma Optical Emission Spectroscopy), X-ray Photoelectron Spectroscopy (XPS), Raman Spectroscopy, Gas Chromatography, Atomic Force Microscopy, and more.

Many companies world-wide trust Cerium Labs with their analysis – shouldn’t you?